Looking back and forward

What an inspiring and wonderful experience this journey has been! How difficult it is to explain why this was so special.
One of principles I started with was to be well equipped to be self-reliant to have no pressure to find a sleeping place or food to make it to the next day. In the Italian part this worked well, in Switzerland I had more problems with this because of the weather. One wet night is still OK, but subsequent days of wet weather  becomes a problem with my tiny tent. Another element I had to pay attention was the route  schedule, because of the arrangements I did make with the friends that joined me from time to time. But overall I was quite flexible to alter my route depending on the needs or opportunities that crossed my path.
Another element was the decision not to take books or music with me, to ignore TV sets at the overnight places and not to read papers. The communication channel with the external world was limited to my mobile telephone to call my family at home and very limited access to the Internet. This was important to be open for what I encountered on the road. This was even enforced by the fact that I walked most of the time alone. Until I reached the Black Forest in Germany almost without encountering other people besides the hosts at the night stops. One of the surprising facts is that you never feel alone, it seems that you need to be isolated surounded by other people to feel lonely, not so in a forest or on a mountain that feels familiar. I enjoyed the spare talks with people along the route or in the evening more than a lot of bla-bla all day long could do.
I never considered giving-up, although I feared sometimes to be forced by external conditions. The weather or the path was never bad, although sometimes it was demanding. In the morning I was from time to time uncertain what the day would bring. But I always arrived sooner or later than expected and in good condition in the evening. What is more beautiful than the sunshine when it stops raining, how well does it feel enjoying a panorama after a steep climb?
The religious places in Umbria and Lazio and the wonderful architecture in the small towns impressed me a lot, before I crossed the Apennines with its splendid and diverse nature. The lovely backyard of Italy. Lovely but these are also the passes between Tuscany and Emilia has also been the battlefields of World War II. It makes me think how import the European union has been to make this as something of the past. Further up the PO plan has a lot of charming places. The stretches along the Serio and Ogno rivers are far from dull tracks. And a city like Cremona is like a pearl to the Po crown. It should be pity to skip this part of the route to or from Rome as some do, but you need to carefully plan the route to avoid the straight asphalt lanes. But paved roads you always will have in this part, this was the reason I also did some 30 kilometres by Bus to avoid problems with my feet. My advice is not to plan day stages that are too long in this area.
After Bergamo I entered the Pre-Alps. What’s in a word! Before you get to the Splügen pass, it goes well up and down between 100 and 2000 meters in an area of old trading routes being used for centuries. I was glad not having taken a by-pass through the valleys in this part although it would have been possible. Leaving Italy entering Switzerland it’s a luxury to have everywhere well marked paths. It allows you go without detail maps and to enjoy the overwhelming nature of the Alps. Crossing the Rhein in Waldshut didn’t mean stop climbing, it goes straight back up to 1300 meters showing me the Alp’s painted as a fresco in the sky. This brought me in the Black Forest with the more than 100 year old westweg. A well-equipped road and used path until today. After crossing the Rhein again near Drussenheim, I entered first the North Vogues and the Saarland, two regions I didn’t know a lot about, but again walking paradises. This wasn’t different with the trails in the Ardennes. So close to home and so surprisingly. Walking the E5 in Luxembourg is like walking in the decor of a fairy tale.
But this journey didn’t come to an end yet, there is the phase before and the phase after. This last part still can go for a while, writing down my memories, arrange photographs, provide some details for people walking same direction. I like to refine the Strada del Nord, some parts I plan to walk again or to work out some alternatives. This route is just like a toy for me.
And what’s next? Making another trip of four months might be difficult to realize. But I’m still dreaming to extend the Strada del Nord, from the South to Rome and from the Low countries to the North Hanse cities. See you again in 2014? 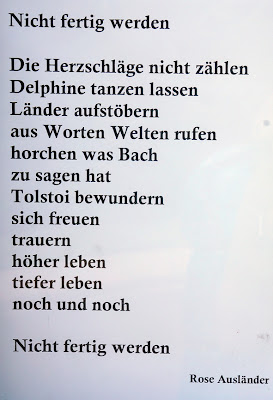 Posted by Luc uit Antwerpen at 3:32 AM No comments:

The final amount that will go to AMAR for support of the projects for the integration of children who lives on the streets in
Rio de Janeiro is 2563€.

A lot of thanks to all the people who brought this amount together! 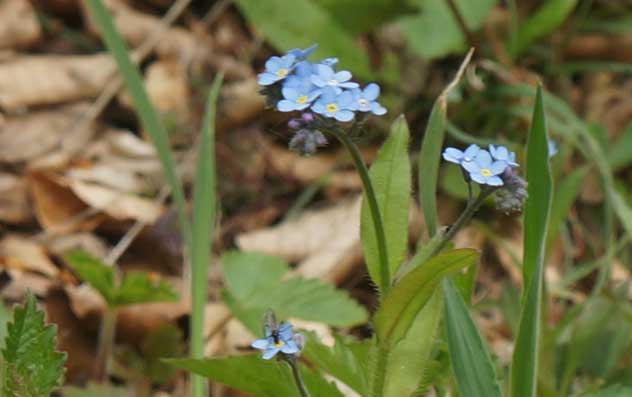 Posted by Luc uit Antwerpen at 12:40 AM No comments:

Elevation profile of the track

When setting-out the route rather paths in the mountains have been chosen than the paved roads in the valleys. During the trek some parts have been replaced by easier paths for several reasons as to respect the schedule, weather conditions or the need to slow down a bit. And in the end it was not the the days in the mountains that was the gave me problems but the long stretches on paved roads.

Hereby a graphic of the GPS data of the entire trail, with some marks that I added. 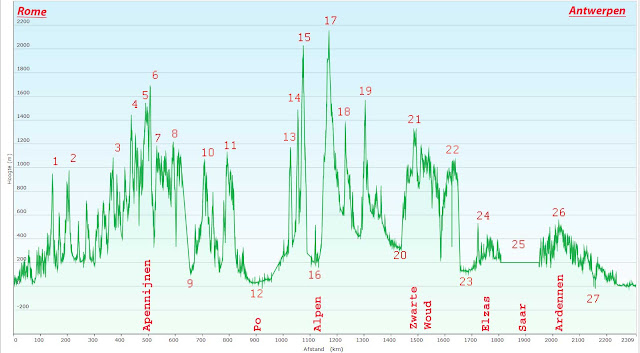 Posted by Luc uit Antwerpen at 1:22 PM No comments: 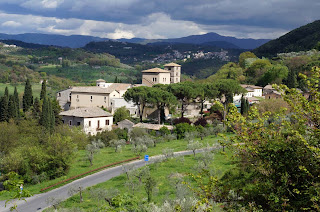 During the trip I have spent quite some time taking pictures. Walking on the track this was an excellent way to give myself some rest. Looking at the pictures once I got home was a bit disappointing as reality or better the experience I have of the reality is that much more exciting that the photographs. But anyway going thru the pictures allows me to look back and remember the good times on had. For those who will travel this road, it will give an idea of what is coming. But what they will see will even be better.

Posted by Luc uit Antwerpen at 1:46 AM No comments:

Total sponsor amount received is 2245 Euro. 45 Euro on top of the initial objective!


2413 kilometer have been walked this is also above the estimated 2200 km.

Thanks a lot for all the people who sponsored, it has kept me going!


More info on AMAR and how to sponsor.

Posted by Luc uit Antwerpen at 12:57 AM No comments: 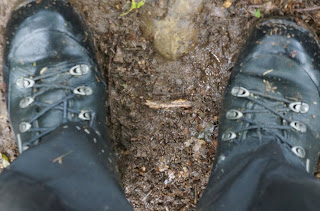 After some fix and repair actions on the data from my GPS it is possible to provide some statics on my trip.

For six days I had no altitude figures due to the problems with the GPS  unit, for these days I used an estimate. The distance is traveled by foot, but here and there, I made some local walks, and these are included. 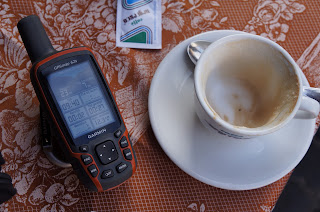 Posted by Luc uit Antwerpen at 1:36 PM No comments: 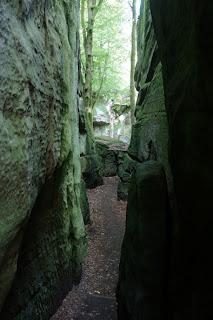 After Trier it's just a few kilometers to cross the border with Luxembourg in Rallingen. At this point a join the GR5 that follows the German-Luxembourg Felsenweg. Here I am passing through a very special piece of nature. The first day I stop at Echternach. For the last month I will enjoy the company of family and friends bringing me step by step closer to home. The GR in Luxembourg continues as a wonderful path through villages as Diekirch, Beaufort and Witz. The walking  roads in Luxembourg are well marked, which makes it easy walking. We cross the Belgian border on a small road near Houfalize. From there we will follow the river Ourthe in the Ardennes before we cross the Meuse in Huy. We reach the Flanders region in Hoegaarden, the location where my forefathers lived in the 17th and 18th century before they came to Antwerp. It’s fun to walk the same roads between Hoegaarden and Leuven as they did some 200 years ago.  Before arriving in Antwerp I have my last stop in Nijlen where a son of me lives. My wife, some of my children and my grandchildren are joining as well, and it is here that I can see for the first time my 3 new born grandchildren. The greatest wonder I encountered on my journey. 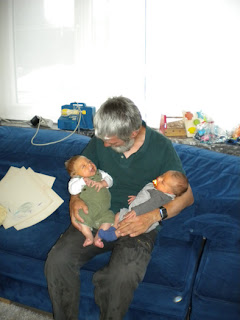 Arriving in Antwerp is a like the last stage in the Tour the France, feeling light and relaxed through the well-known streets now that the battle is over with all the memories of a most remarkable journey.
In the Central Station, the Antwerp Cathedral of the traveller, my family, some journalists and the mayor of Edegem are awaiting me and offer a beer of Edegem that has been introduced while I was away. After a most enjoyable reception in the station hall we take the city bus home to conclude this part of the story. 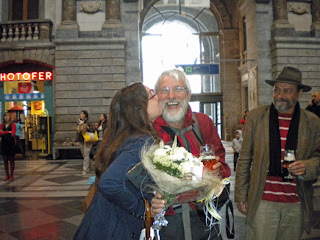 Posted by Luc uit Antwerpen at 6:44 AM No comments:

The total amount that will go to AMAR to support projects for the integration of street children in Rio de Janeiro is 2563€, more than 1€ for each kilimeter of the strada del nord! 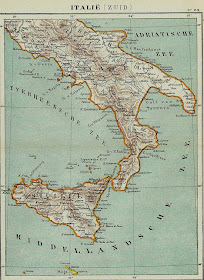 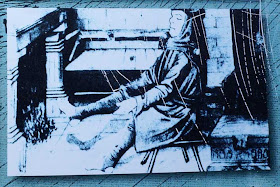